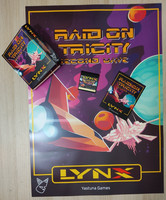 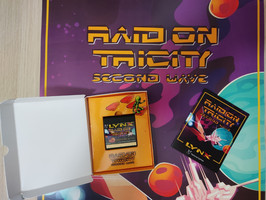 It has been a while since the first prototype of this game during an AC connexion in France. Last year, I put the current version of the game as free digital release on itch.io.

Thanks you for your support, and for downloading and playing my games.

This year, a new adventure begins, and Yastuna Games is officially launched to publish games for our beloved retro consoles. Raid on TriCity is one of our launch titles, and is now better than ever.

So the final version is here, available in 2 flavours : enhanced digital release (always for free), and expanded physical release for your Atari Lynx.

Raid on TriCity - First Impact is the name of the new arcade version of the game, and it enhances the experience from last year:

This version is available for free on itch.io for your flashcards or emulators.

Raid on TriCity - Second Wave is the physical release of the game, it features the same arcade mode that First Impact has, and also adds a whole new  Story mode:

Raid on TriCity - Second Wave is available at https://yastuna-games.com webshop

Get Raid on TriCity